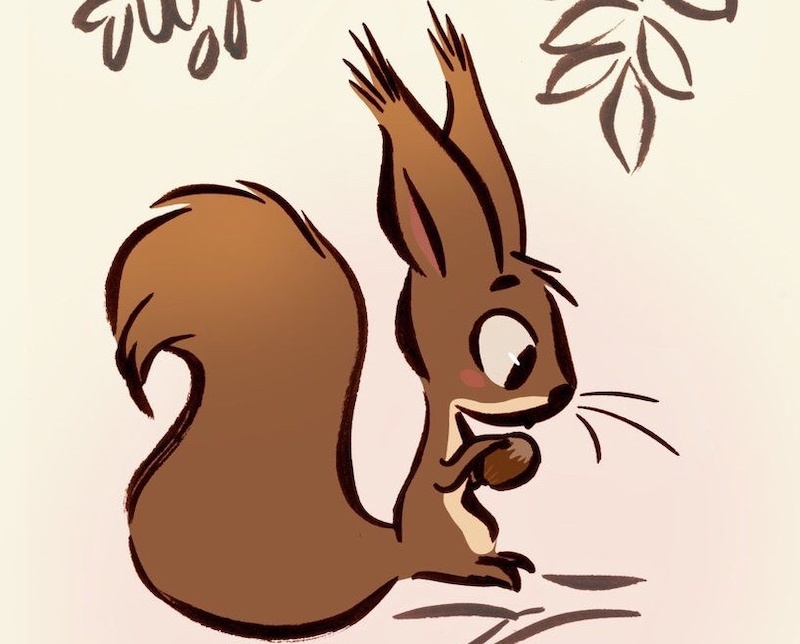 There were three furry friends.

They found each other one day when they were lost, and they have been inseparable ever since. The first of the three was a woodpecker with dashing goggles. Oh, how he loved his goggles! He won’t be seen without them. They weren’t just any kind of googles. He couldn’t see very well, so they helped him see better and for when he was busy doing what he did best: making holes. They protected his eyes from all the wood chips that happen to fly in his face. The second was a feisty, little, red squirrel. A wondrous acrobat! And last but not least, the biggest of the three with a lovely soft bushy long tail.  There is one thing they all have in common: they all love nuts!

«Who… could… that be at this time… of night?» Wondered the woodpecker half asleep.

«Are you still in bed woodpecker?! You haven’t put on your magic goggles! Here you go».

«Woodpecker, I need your help to find the humungous nut everyone’s been talking about. Can you help me? Pleeease…I want it! I want!», begged the Squirrel swaying side to side with his hands clenched together tight to his mouth.

So the Squirrel and the Woodpecker got ready to go on the search for the great nut! Of course on their way, they would need food so they wrapped some up for their journey and off they went.

Squirrel trapezed down the tall tree onto the ground while Woodpecker stayed for a moment longer taking in the view before flying down to catch up with Squirrel.

«Squirrel can I ask you something? If we were to find the nut… “the great nut” and it is as big as they say it is… how will we bring it home? We’re tiny!»

Squirrel looked a little confused and started scratching his head. «Oh, I didn’t think about that. Hmm…», he answered.

They came across all sorts of things like mushrooms, pine cones, a purple hat and a pair of scruffy old boots, big stones, warm coloured leaves everywhere but not a (sign in sight of a) gigantic nut like Squirrel is dreaming of. Just when they least expected it, feeling all tired and cold, they both looked up as they noticed the weather was changing. The sky was becoming cloudier and fluffy chunks of snow were starting to fall from the sky. They loved it but they hoped they would find it in time. When in the distance…

«There! Look, Woodpecker! Can you see what I see?», exclaimed Squirrel with excitement.

«Quick, let’s go!», said Woodpecker, as he flew in a rush while Squirrel ran to join him.

«We’ve found it!», as they leaped with joy. The Squirrel was already licking his lips, and with that, all the snow off his face. In that moment though, Woodpecker heard a noise and became a little wary, while Squirrel was sniffing out the nut, poking it, jumping over it and running around it happily. Woodpecker stopped him with his wing and said, «Shh… hold still a moment Squirrel, I can hear something!». They didn’t know where it was coming from, but they could definitely hear something close by.

Squirrel was worried if there were others around looking for the nut too! He looked up and down at the nut and with all his might, sticking his tongue out, he started to push the nut while the Woodpecker hopped on top of it looking like an acrobat balancing on a ball at the circus. Meanwhile the snow was starting to fall heavier and the nut soon became a big ball of snow as they rolled it along. Exhausted for all that effort they decided to take a break while approaching a little river, where they saw a little row boat. Normally they would have run off quietly but they realised the noises they could hear were coming from the boat. The Woodpecker flew onto the boat and landed on something softer and warmer than he expected. He suspiciously raised his eyebrow and looking down at his feet he said… «Oh, oh!».

The boat was full of snow, but the snow was not the only thing on that boat… A voice came from beneath Woodpecker’s feet: «What are you doing on my head?» asked Raccoon.

«I was bored and lonely, then I must have fallen asleep and now I have no food for the winter!» Raccoon said.

The truth was that Raccoon was a bit embarrassed to say that he was left alone by his kind because he was albino. In the meantime the Squirrel took a long jump and joined the two and he asked the Woodpecker, «What’s going on here? Are you talking to yourself again?». «Look well… we’ve got company, friend! Meet Raccoon!».

Raccoon was touched by the Squirrel’s words, he wasn’t used to kindness. He sat up and shook off all the snow and by accident the two friends were covered in it. That made Raccoon giggle while they were trying to shake the snow off. «That’s better! Oh no, we forgot about the nut!», shouted the Squirrel with both his hands holding his furry head.

«Ah yes!», said Woodpecker. «We have found the humungous nut!».

Raccoon crouched down and lowered his head looking at both of them and said, «Nuts?! Oh now you’re talkin’! I’m crazy for nuts! Look here, I have managed to find some but they’re not enough for the winter… Anyway, how big you’re talkin’?».

The two companions looked at each other and then said, “As big as a watermelon! Thinking about it, you’re very welcome to come and stay with us if you like at our house. We have plenty of food to eat!». All three of them went to get the wonderful treat and loaded it on the boat. And then they headed home. He could just about peek to see outside. The windows were glittering with snow as the sun shined low on the horizon while the window steamed up. With his red nose and whiskers against the cool glass, Raccoon smiled knowing he finally found good friends that loved him for who he was.

Any cookies that may not be particularly necessary for the website to function and is used specifically to collect user personal data via analytics, ads, other embedded contents are termed as non-necessary cookies. It is mandatory to procure user consent prior to running these cookies on your website.